And speaking of politics...


“Was the dementia of old age a blessing in disguise? No more thoughts. No more damage inflicted. No more memories of damage survived.”

If you've followed any of my stories about my teaching art to Dementia patients you might think we do more chit chatting than actual art projects. The truth is, we just do a lot of chatting while doing projects. I am truly interested in their stories, histories, and opinions. I often ask for advice as well. More importantly, I ask a lot of questions, especially about their pasts, to help them dig up memories about themselves and recall their pasts.

I am not particularly political, and often avoid political discussions if possible because they often lead to fights. In general I also think most politicians are liars and cheats.  Maybe I've watched too many episodes of Veep and House of Cards. And I've listened to too much from the current political race. The reality(unreality)-show like atmosphere of today's candidates (one in particular) sickens me, and that's all I'm going to say. The other day while working with my Dementia patients, they got into a political discussion, and FINALLY, I walked away with a laugh.

(Note to some: by laughing  and gently making fun of what they say and do I am not in any way mocking or minimizing the seriousness of Dementia and Alzheimer's Disease. These friends are self-deprecating and often make fun of themselves. I spend a lot of time building their confidence and there is a big difference in laughing AT someone and laughing WITH someone. As Jimmy Buffett once said, "If I couldn't laugh, I'd just go insane").

Here's how the discussion went (names have been changed of course). There are about 4 or 5 women, all in their mid to upper 80s:

Mrs. R: What about the election coming up? Are we going to vote?

Mrs. S: When is the election? There must not be much publicity about it because I haven't heard a thing about what's going on...

Mrs. H: Can I vote for Ronald Reagan?

Mrs. L: I feel like I should know something about this Donald Crump person...

Mrs. S: Is Eisenhower still alive or is he dead? Didn't he just die?

Mrs. S: He was President I thought.

me: So what do you all think about the ones running for President now?

me: It might be a woman -- Hillary Clinton is running.

Mrs. S: YES! I will vote for her! That would be more fun than a barrel of monkeys!

me: Mrs. M, who do you think will be the next President?

Mrs. L: Of the United States?

Mrs. S: Who's the other one running besides Hillary?

Remember the movie Trading Places -- the huge Eddie Murphy laugh when he says, "It's just so ridiculous!!" 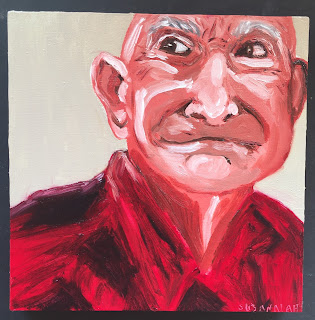