Death is no more than passing from one room into another. But there is a difference for me, you know. Because in that other room, I shall be able to see.
--Helen Keller
(This is a continuation of a "spiritual journey" story I began earlier.)
This was a dark dark time. I felt like I had a black cloud over me and was being punished for something -- divorce, sickness, now death. When my husband and I had met, we shared a fascination with cemeteries (mine I think was inherited, as I remember a birthday of my grandmother and all she wanted to do was go to the cemetery and look for relatives). We both were photographers and loved the statuary, especially, visiting famous ones in Paris, London, and elsewhere, Vermont and lots of country roads we drove down. One of the most beautiful cemeteries I've ever seen is Richmond's own Hollywood Cemetery, where our first two boys are now buried. Ironically, on our wedding day we were a few minutes early to our wedding feast at a favorite restaurant. To pass the time until it opened, we, along with a lot of our wedding party, drove through nearby Hollywood.
Foreshadowing?
Eventually our cemetery fascinati
on passed somewhat, we ended up spending a lot of tearful time in Hollywood through the next few months and years, but I had kept a bunch of the photos I took there. I found them recently and they still evoke a mood of both sadness and peac

e for me. I manipulated them some with paper and paint in the way I am working today. Here are a few: 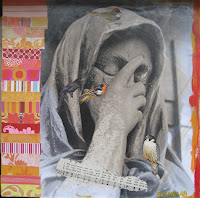 The singlemost important thing that happened during this time was that I stopped believing God had control of things. This changed the outlook that I had carried for 35 years or so, and in essence, involved giving up my security blanket, which rocked my world. But simultaneously, I was able to give up the guilt and
the feeling that I was being "punished" all this time. The book that changed my thinking, my "Bible", which I have read about seven times no
w, given to countlesspeople, and raved about for years, is When Bad Things Happen To Good People by Rabbi Harold Kushner. This was written way back in the 1960s or 1970s but still speaks so loudly to me. I have read some of his other books and this one is by far the best. I am currently reading Overcoming Life's Disappointments which gives great lessons on how to act and think when the chips are down.
So with this epiphany, I began a brighter outlook and to recover from the many losses. We had gotten so many beautiful flowers at the deaths of our twins, and I had taken photos of some of them. Thus began my flower series, which continues today. By comparing the pieces above with the pieces below, you can see that my outlook truly changed. 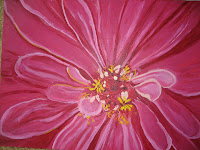 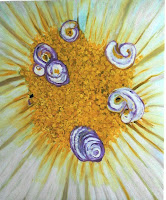 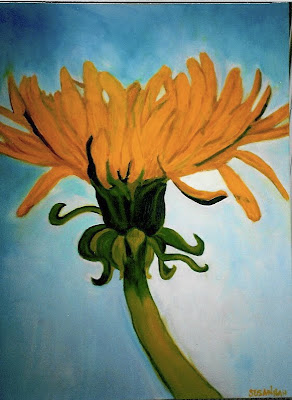 Posted by susannah at 10:45 AM No comments: Links to this post