He expresses himself as no one else scarce begins to do in the language of the art he practices. He is capable of an immense and exquisite correspondence with life.

﻿
Until I made my first rabbit collage and began selling prints of it, I had no idea how many rabid Rabbit People there are out there. I am now selling 5 different prints of rabbits, from originals I have sold, and have sold many other collages that I haven't made prints of. The rabbits outsell all of the other animals. 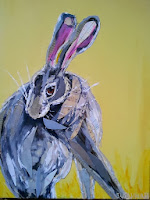 A customer on etsy requested that I contact her anytime I do another rabbit piece, so she might have first dibs on it. I have, and she has bought several originals from me, and some rabbit prints and some rabbit notecards. (Excuse the general term "rabbit".  I have been corrected several times, one particular piece is a Rabbit, one is a Bunny, and that one is a Hare.)

On etsy, I have joined many teams, related to things I make and/or processes I use, and yes, I am on the Etsy Rabbits Team.  The customer mentioned before contacted me last week and told me that one of her beloved rabbits passed away over the summer, and could I do a painting of him. Then she told me I must think she's crazy, but she's not, she just loves rabbits. (By the way, National Rabbit Day was in September). 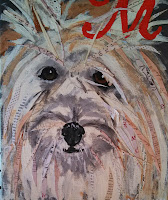 I assured her she isn't crazy, and that, believe me, there are lots of people just like her out there. For example, I am in the middle of working on a group of commissions. Someone wanted to surprise his wife for her birthday and asked if I would do a painting of each of the animals they had had together, but had passed away, as he wanted to line their hallway with the paintings. No cats, no birds, no gerbils. A couple of dogs, and 9 rabbits. Here are some of them: 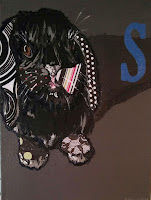 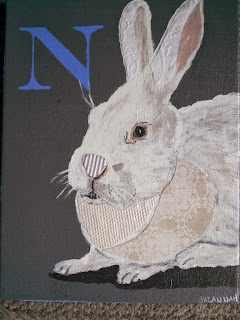 Posted by susannah at 1:29 PM No comments: Links to this post