When an old man dies, a library burns


This is an old African proverb.

One of the women I work with in the Dementia area of the retirement home passed away last week. She was one of my favorites, 93, and I had worked (played) with her for 4 years.  She had lived her whole life in Richmond. Because she repeated the same details in her stories, I knew they were true.  I love to hear stories about Richmond's history. I was born here, but moved when I was 2 and a 1/2. In college several of my closest friends were from Richmond, and it seemed like such a rich and glamorous place to be from, especially after growing up "a country mouse". I've been living here for 20 years now, so I guess I can say I'm from Richmond (unless I'm talking to a Richmonder), and the city truly becomes richer and dearer to me as time goes on. I live in a historic neighborhood in a 100+-year old house and someday, someday, I'll take the time to research more of the history of my home and neighborhood.  It's comforting to know so many other people have walked these streets, lived in these homes, had their own adventures.

So, I naturally get the elderly Richmond residents to tell me their stories. The woman mentioned above had plenty of tales to tell. She grew up in Oregon Hill, on Cherry Street. She spent her childhood running around in Hollywood Cemetery -- it was her playground. She walked to the old train station (now the Science Museum) to feed coffee to the troops as they came in on the trains, during World War II.

My favorite story she used to tell was about when the Altria Theater was being built -- to most Richmonders it will forever be The Mosque. The theater is beautiful, Moorish in decor, and used to have a bowling alley and pool. (Maybe it still does.) You used to be able to take a tour of the inside. I'm not sure if that's still an option. When this woman was young, she watched for months as the building was being constructed. Suddenly, she said, one day construction was halted. Because the workers found QUICKSAND. Apparently it doesn't occur only on Gilligan's Island. She wasn't sure of all the details, or how it was overcome, and eventually they continued the construction.

She told me she spent her whole life on Cherry Street, until she got married in the mid 1940s, when she moved to the West End. "Where did you live?" I asked her.
"Next door to The Mosque".
The West End.

One day we looked at old photos from the height of the Thalhimer's and Miller & Rhoads era, presented to us by the Valentine Museum. She and several other women told stories of meeting friends "under the old clock", and then having lunch together in the tea room, listening to the piano being played. They all wore dresses with white gloves. In one photo, the woman I've been talking about pointed to someone in the photo and said, "I think that's me." Probably was. 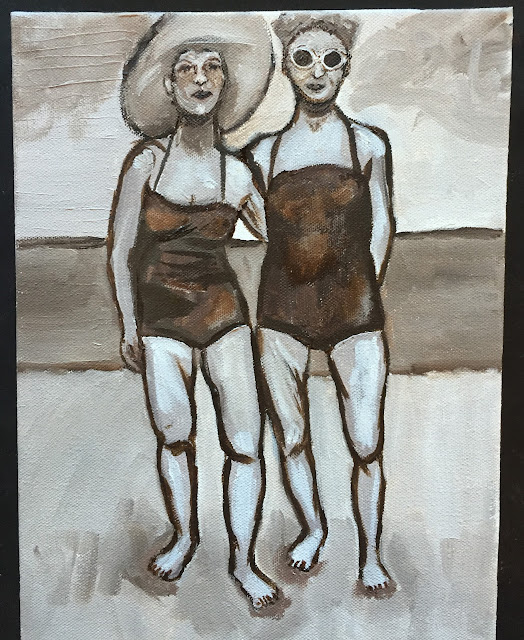