Until one has loved an animal, a part of one's soul remains unawakened.
Anatole France


Any of you that know me, have seen my paintings, or any of my Facebook or Instagram posts know that I am crazy about dogs.  I always have been. You've probably heard the phrase, "The more I know people the more I love my dog", from Mark Twain. Enough said. I was never a girl crazy for horses like so many females. (Usually a preteen phase, horses are a symbol of power). It was always, always dogs for me.  I considered being a veterinarian when I grew up but I was afraid I'd have to see too many hurting animals so I changed my aspirations. One summer I returned from sleep away camp and my sweet mother had painted dogs all over my bedroom furniture. I was thrilled.

I was lucky enough to grow up with a Golden Retriever who was my constant companion. We got him when I was about 4 years old and from then on I refused to go to bed without him.  I would build half a nest on my bed with all of my dolls and stuffed animals, and he would curl around me to form the other half of the nest. He always stayed until I was asleep, then got up and checked on everyone else in the house. He kept a nightly patrol sleeping for a while here and there between checking on us. He lived until he was almost 16, two years after we began giving him daily shots for diabetes. I spent my entire childhood and teens with him and I was in college when we finally had to put him down. He had been with me for my whole life. He was as much a brother to me as my biological human brother.  He was an integral part of my childhood and influenced the person I am today. He taught me about love, play, sharing, loyalty, obedience. He let me dress him up, attended my tea parties, listened as I read books to him, was often a student in my made up classroom, wrestled with me, let me play hair salon with him, tried my cooking, listened to my boyfriend problems. I became a forever dog lover because of him. (Even now as I write this I am getting teary).

*(If you want to read a fantastic dog novel, read The Story of Edgar Sawtelle.)

I am slowly making my way through several dog manuals, trying to paint each breed. No matter how many paintings or prints I have of different varieties of dogs, someone always asks for the breed that I don't have. So I'm trying to correct that. Here are a few: 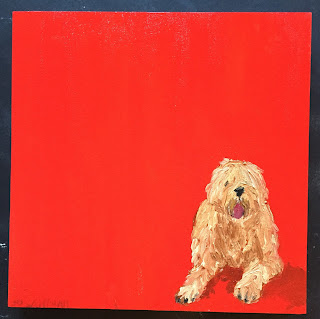 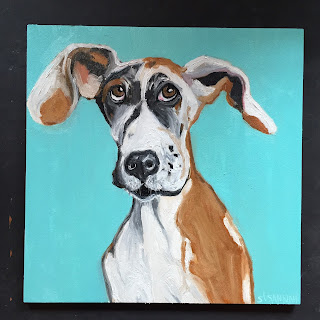 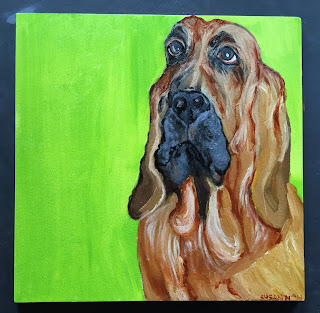 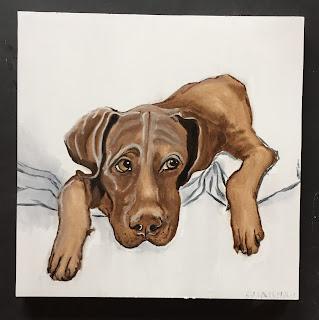 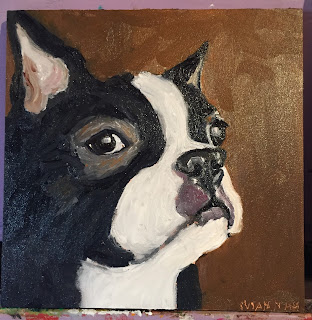 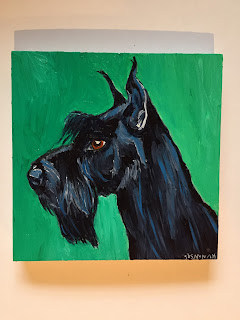 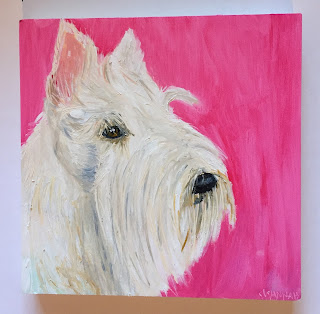 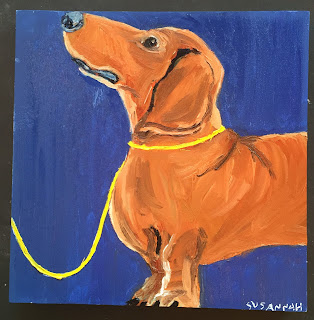 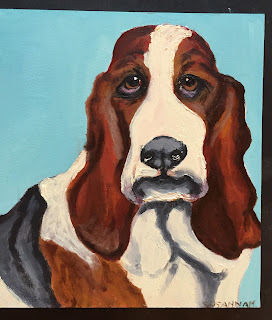 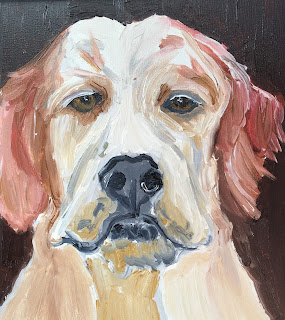 I've parented various animals since our Golden Boy but I didn't fall truly head over heels in love again until we adopted Rufus, not coincidentally another Golden Retriever. He's my third child, the one I have had more time to just sit and look at and fall in love with over and over. My boys are 15 months apart and their early years are a blur of diapers, constant motion, messes, and physical exhaustion. I simply did not have time to ooh and aah over them for hours on end like I do with Rufus.

Rufus has again reminded me of the wonder of these creatures. He's a beautiful specimen, and also silly, affectionate, and so very, very sweet. He has spent many hours lying next to me in bed when I am not feeling well. He is so happy when I get home in the afternoon, or greet him in the morning, or offer to take him for a walk. He smiles a huge smile, wags his tail like mad, and turns in circles, leaning on me the whole time, as if I've just offered him the greatest gift in the world, for the first time. He loves my cooking, never disses a movie I want to watch, is perfectly happy to hang out and read magazines, isn't constantly calling me to "come here!", tries to help me with many chores like gardening and making the bed. He respects my choices, doesn't hold grudges, doesn't talk back and never tries to make me feel bad about something I've said or done. He even loves doing yoga with me, although he sometimes hogs the mat.

And he makes me laugh every single day.

Besides their kind demeanor, I'm fascinated by the variety of dogs out there. What an imagination someone had when he made this world!! Tall dogs, short dogs, floppy eared dogs, dogs with ears that stand up, shorthaired dogs, lush long haired dogs, black, red ,white, grey dogs --or a combination of all of those colors in one dog. Spotted dogs, blue eyed dogs, smashed face dogs, racing dogs, hunting dogs, crime solving dogs, show dogs. Dogs that howl, those that yap. All of these parts are interesting and wonderful but to me the quirky partss are what I love the most. Here are a few.

Rufus loves to sit in the Frog Dog position. It never fails to make me laugh even though I've seen it a hundred times. 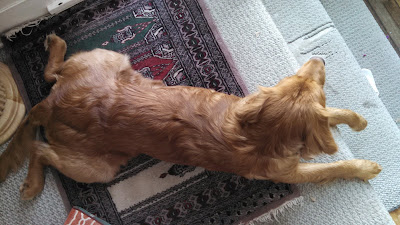 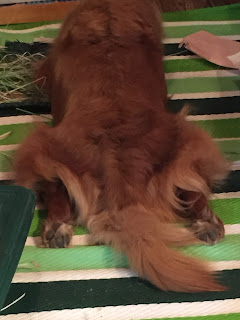 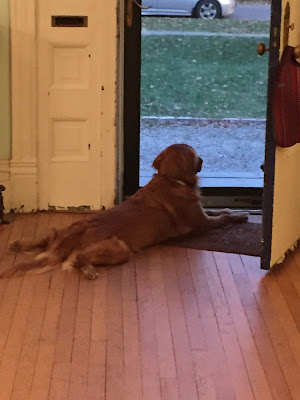 There are other quirks. A friend once came over with a Boxer puppy, who played in the yard with Rufus. Although she was tiny, she kept trying to pin him down -- to trap Rufus on the ground and stand over him with her legs on each side. "It's what Boxers do," my friend said nonchalantly.  It was really funny looking; they actually like to pin down their playmates. Which came first, the Boxer dog or boxer fighter person?

This is Bailey and apparently this is a Dachshund thing, to be able to balance that short compact body on his rear end (have also seen Basset Hounds do it): 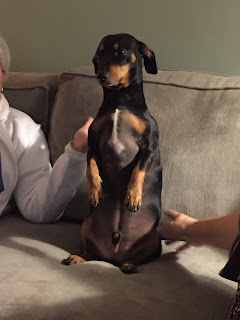 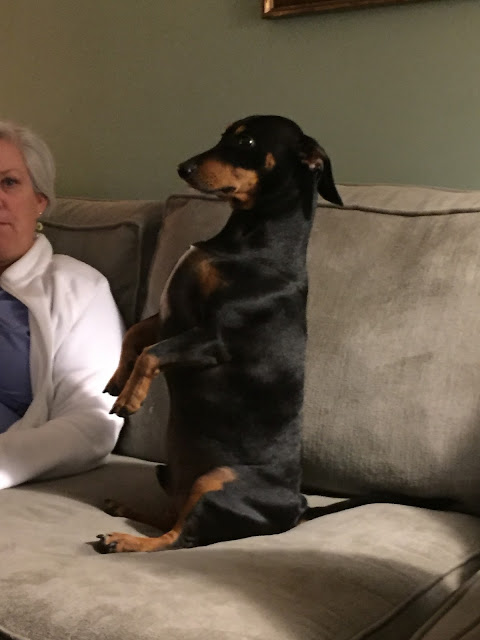 And this is a friend's whippet.  Again, this is what whippets do, apparently. Is she double jointed? 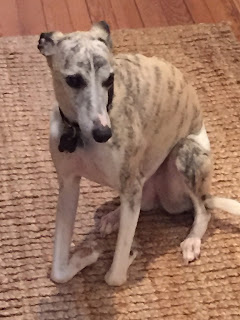 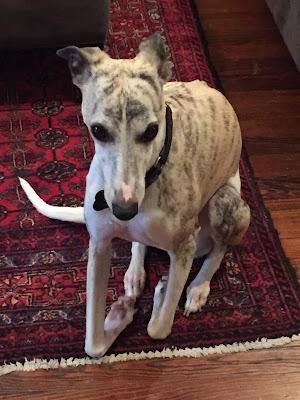 This is how she sleeps. Can she make herself any smaller? 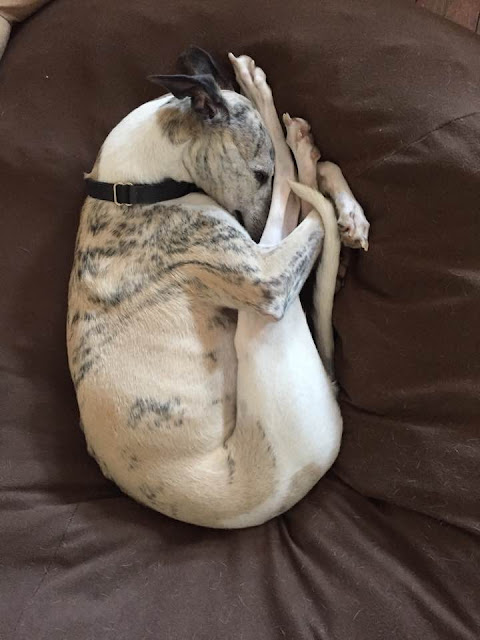 What does your breed do?