First we eat, then we do everything else.
M.F.K. Fisher

One of our Resolutions for last year was to begin an Around The World learning experience, primarily through food, with our family. I got the idea from an interview on NPR with Sasha Martin, who began this practice -- in much greater depth -- with her family, who were a group of picky eaters. She also missed the traveling she had been able to do before settling down into family life and wanted a way to recapture the intoxicating feeling of new discoveries. I heard the piece on the radio (where I get so much of my information -- am I living in the 1940s?) and immediately loved the idea. Our family eats dinner together most nights and this sounded like an interesting and doable thing we could take on, even during a hectic school year.  And, I LOVE a theme.  Just as important, it could be a learning opportunity for my kids. My husband and I have both lived abroad and I knew it would also be a way of relating our own experiences and stories with our children. Lastly, a food related project could not make my husband happier. It reminded me of the Julie/Julia project and going through the whole cookbook A to Z . Sasha Martin's story can be found here: http://publicradiotulsa.org/post/tulsa-author-sasha-martins-life-scratch-memoir-food-family-and-forgiveness.

With both of us working several jobs, school, sports, volunteering, youth groups, and friends, we realized that our "world journey" could only be comprised of one night a week with dinner from that country and whatever other related info we could find. So one night in early January (2016) we began. With A. My husband and I threw around several countries -- Armenia? Afghanistan? My husband's family is Middle Eastern, and we wanted to eat something totally different from any of our usual influences. We settled on Argentina. This was the first week after New Year's. The kids went back to school on Monday (and us to work),  Tuesday the kids were involved in a Chopped Junior cooking competition, Thursday I had Book Club. A normal busy week for us. So Wednesday was the night we began.

John and  I decided to split up preparing the meals as much as we could, knowing that sometimes I would do the whole thing and sometimes he would take over. I began cooking late Wednesday afternoon. I made cookies, "Alfajores", which coincidentally I had recently made for Christmas packages but were given no Argentinian reference and named something else. Also, steak with Chimichurri sauce, and sausages. Also I made ham and cheese Empanadas which were ridiculously easy...The kids did their research and were surprisingly enthusiastic-- each couldn't wait to give his 3 page report (single spaced, typed -- not really). We found music to the Tango and John and I tried to demonstrate. We had taken ballroom dancing lessons before our wedding 16 years ago but never got much further than the Foxtrot, although we saw the Tango demonstrated. Let's just say that my close friends call me "Elaine" -- our boys didn't learn to tango on this night.

We are now in late February, a year later and just finished our journey a few weeks ago. We have only missed a few weeks of meals here and there, and decided to take last summer off.  From Argentina we went to Belgium and ate a version of a beef stew. I am extremely proud to say that a few weeks after this meal, the food section in the newspaper featured a "Carbonnade a la Flamande", and one of my sons pointed out where it was from. I have to admit that I pushed Belgium because of the chocolate, and I happily bought a big box of Godiva chocolates to bring to the project. Dessert has always been a requirement of this undertaking.

Next was Cuba, which included Mojitos for the grown ups and Tres Leches cake, along with Mojo marinated pork, black beans, and tostones.

There are not many countries that begin with "D". Denmark was the obvious choice, but the night before our family meal John realized that Denmark foods are mostly bread -- yum --and seafood -- which three of us don't eat. What "D" country is left? Djbouti!! We laughed a lot at this meal, we had barely heard of Djbouti but we sure had fun saying it. Every time one of us mentioned it, someone else would say "What did you say about my booty?!!". 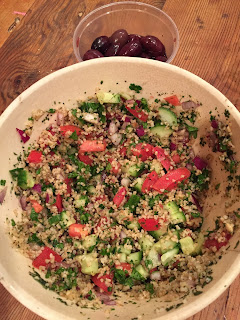 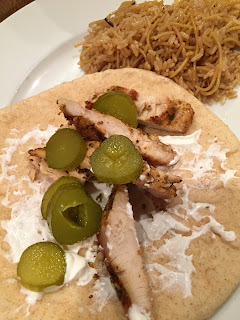 Qatar was next. We proudly told about Richmond's art school, Virginia Commonwealth University, and its Art Program there, we pondered the correct pronunciation of the country -- KaTar or Cotter? By this time our boys had stopped printing 8 or 10 pages of information ("Relevance, boys, relevance!!), and they started reading facts off their phones. One of Raine's facts included a favorite food of Qatar including Camel Balls (we did not prepare these for our meal), and that Qatar-ian men could turn their heads 360 degrees to stare at a woman. (WHAT???). Rye always concentrates on the sports of a country, and he told us that Qatar had beat Australia in a handball tournament in 2013. Another talk on relevance of information to our project.

Russia followed -- the vodka was great (for the adults) but we were not so crazy about the cold Beet Soup; Switzerland -- Fondue!!! Taiwan was a wash as we ended up at a Vietnamese restaurant by mistake. This was toward the end of the school year and we were a little burned out on our exercise, which is when we decided to take a break for the summer. We had a redo and tried Turkey. U ("no, we are not doing the United States") -- Uzbekistan, and then Venezuela when September arrived.

Soon we were at W with only a few weeks to go until our project was complete. John has recorded photos of the foods and meals, and I have been intermittently painting our meals  -- here are a few that I've started. Maybe I'll put together a book and give to the boys to remember this time. Although the exercise has been a little tiring ("African food -- again??" and "Let's just GO OUT"), and the research about the countries has become a little sparse, we are not finished with this exercise. We've learned a lot, tried a lot, and are officially Explorers of the World. Our boys have requested our next project -- each state of the U.S.:   Peanut soup, anyone? 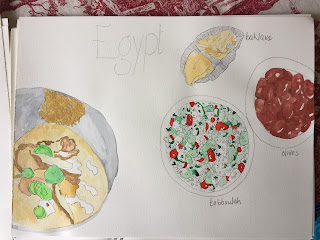 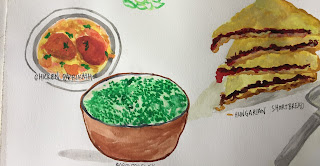