(this is a continuation of a speech I was asked to give on my personal "spiritual journey" in 2010.)
Difficult times have helped me to understand better than before how infinitely rich and beutiful life is in every way and that so many things that one goes worrying about are of no importance whatsoever
Isak Dinesen

Life moved on. The physical pain from the chronic illness continued, in different and lesser forms. The grief was slowly slowly mixed with hope as I continued to read and study the wisdom of Rabbi Kushner. Eventually, fairly quickly in the scheme of things, I was pregnant again. Thrilled, nervous, wary, excited -- it was a roller coaster of emotions. Finally, finally, my Raine was born, a wee bit early, on May 16 (if he had gone full term he would have been born on the day I lost the twins). Perfect in every way, except for the colic that made him cry for 16 hours a day. No time to paint. Lots of time to heal, and think. Eventually I began to find an hour here or thirty minutes there to paint. This time, my mind began to dwell on more domestic issues, and that's when the dessert paintings started. I have heard advice to writers, to write what they know about, and I suppose with painting it's no different. I was practically weaned on sugar! I had been baking fun desserts for friends and family for years, (I really really loved cupcakes way before they were cool), and had been taking and gathering photos for a while. Clearly in a happier place, I have had a lot of fun including the many dessert references on the paintings that are such a common part of our dialogue. Some of the paintings' names are: Sugar Rush, Save Room For Dessert;Cupcake Nation; 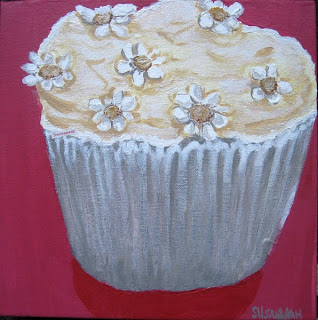 Eat Cake; Eat Me (a reference to Alice in Wonderland); Just Desserts; Hello, Cupcake; and Happy Ending, among others. I've done about 50 now, and I still love to paint a cake or pie. Here are a few of them: 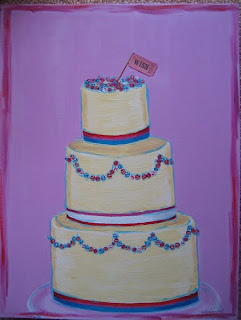 Posted by susannah at 9:44 PM No comments: Links to this post